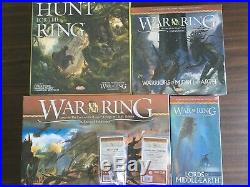 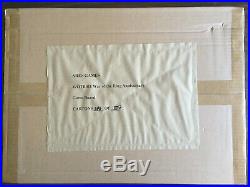 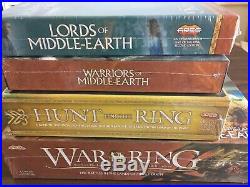 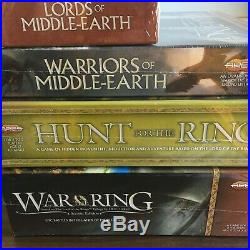 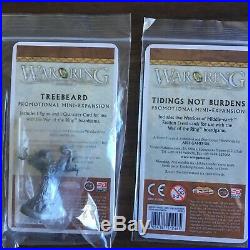 Initially, the Free People Nations are reluctant to take arms against Sauron, so they must be attacked by Sauron or persuaded by Gandalf or other Companions, before they start to fight properly: this is represented by the Political Track, which shows if a Nation is ready to fight in the War of the Ring or not. The game can be won by a military victory, if Sauron conquers a certain number of Free People cities and strongholds or vice versa. But the true hope of the Free Peoples lies with the quest of the Ringbearer: while the armies clash across Middle Earth, the Fellowship of the Ring is trying to get secretly to Mount Doom to destroy the One Ring. Sauron is not aware of the real intention of his enemies but is looking across Middle Earth for the precious Ring, so that the Fellowship is going to face numerous dangers, represented by the rules of The Hunt for the Ring.

But the Companions can spur the Free Peoples to the fight against Sauron, so the Free People player must balance the need to protect the Ringbearer from harm, against the attempt to raise a proper defense against the armies of the Shadow, so that they do not overrun Middle Earth before the Ringbearer completes his quest. Each game turn revolves around the roll of Action Dice: each die corresponds to an action that a player can do during a turn. Depending on the face rolled on each die, different actions are possible (moving armies, characters, recruiting troops, advancing a Political Track).

Action dice can also be used to draw or play Event Cards. Event Cards are played to represent specific events from the story (or events that could possibly have happened) that cannot be portrayed through normal game-play. Each Event Card can also create an unexpected turn in the game, allowing special actions or altering the course of a battle. War of the Ring: Warriors of Middle-earth includes Ents, Dead Men of Dunharrow, Great Eagles of the Misty Mountains, Corsairs of Umbar, Wild Hilmen from Dunland, and Giant Spiders, and with this new expansion for War of the Ring (second edition), these warriors and creatures of Middle-earth previously featured only as special Event Cards will become an essential part of the game, with unique figures and specific abilities. Warriors of Middle-earth also presents new mechanisms to enhance the game.

Faction Dice and Faction Events, used together with the new figures, open up new and exciting strategies and make the War of the Ring (second edition) even more challenging and fun. With Lords of Middle-earth , the first expansion for the War of the Ring (second edition) board game, players may explore many other possibilities to create fresh gaming opportunities and new strategies. Important personalities, previously featured in the game only through Event Cards, are represented by specific figures and rules. New Characters include Elrond, Galadriel, Sméagol, Gothmog, and the powerful Balrog of Moria, as well as alternate versions of Gandalf, the Witch-king, and the Mouth of Sauron. New special Action Dice are included: Elven Ring Keepers dice for the Free Peoples player and Lesser Minion dice for the Shadow player. New versions of all the Companions of the Fellowship of the Ring are also included, to play the optional "Council of Rivendell" rules. As an added bonus, figures for Aragorn and Gandalf the White are provided, accessories to the game that fans have been eagerly awaiting! This is your chance to forge the destiny of an age..

In Hunt for the Ring , one player takes the role of Frodo and his companions, who are journeying from the Shire to Rivendell, while up to four other players represent the Nazgûl who are trying to hunt down the hobbits. While traveling, Frodo and others must resist being corrupted by the Ring that he wears. Hunt for the Ring is a hidden movement game played in two chapters, with each chapter being played on a different game board. In the first chapter, the Frodo player attempts to move from the Shire to Bree, gaining corruption points if they fail to do so after sixteen turns.

If the Frodo player succeeds, they can either record their exit point (and other game details) to play the second chapter at a later time, or they can continue immediately, with the second chapter having the Frodo player move from Bree to Rivendell. In this chapter, the Frodo player doesn't control the hobbits directly, but instead draws cards from a journey deck, with each card showing one of many paths to Rivendell. The WAR OF THE RING Anniversary Release Gameboard (only) includes: two gameboards, 64 x 88 cm each.

The item "War Of The Ring Middle Earth Ares Lord of the Rings bundle all shrink wrapped" is in sale since Tuesday, October 22, 2019. This item is in the category "Toys, Hobbies\Games\Board & Traditional Games\Contemporary Manufacture".

8cn17iwib" and is located in Ulverstone. This item can be shipped worldwide.