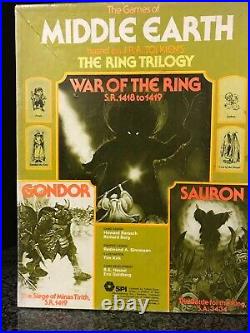 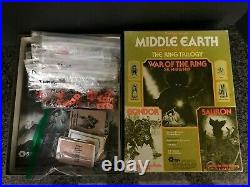 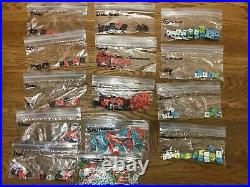 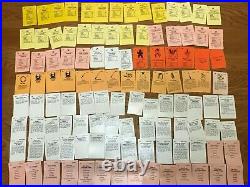 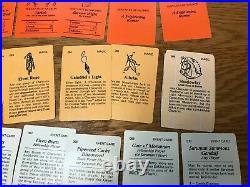 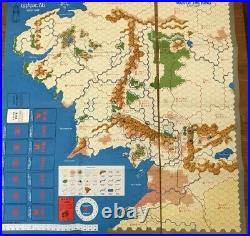 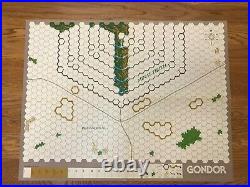 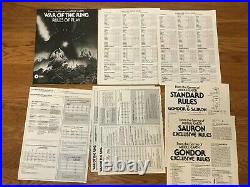 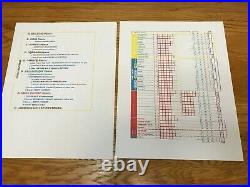 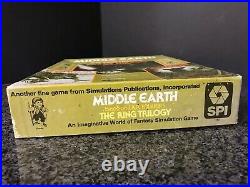 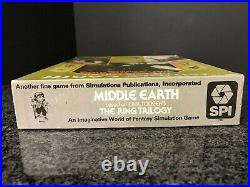 The Games of MIDDLE EARTH (Trilogy) based upon J. Tolkiens THE RING TRILOGY, strategy/war boardgames. WAR OF THE RING: S.

SAURON: The Battle for the Ring, S. GONDOR: The Siege of Minas Tirith, S. Tolkien's Middle Earth, "Sauron" is a simulation of the Battle of Dagorlad from the 2nd Age of between Sauron and the forces of the Free Peoples (elves, men and dwarves) outside the main gate of Mordor. Part of the SPI Middle Earth trilogy along with War of the Ring and Sauron. On a large map of Middle Earth, armies are mustering and heroes are readying to fight the shadow spreading out of Mordor.

The game is played on two levels. Both sides (or three if someone wants to play Saruman) have great armies that battle in a typical wargame style while another game is going on at the same time with individual characters around the fate of the One Ring.

In the Campaign game Sauron's forces are the more powerful but the free peoples get the edge in the Character game. Highly sought after as a collectors item. This set is called The Games of Middle Earth. Based on the siege of Minas Tirith along with the battle outside the city gate as depicted in J.

Tolkien's novel The Lord of the Rings. Grond the Wolfs Head (battering ram).

About War of the Ring from Wikipedia: It was the first wargame to cover the entire conflict depicted in the story (starting from the Fellowship's departure from Rivendell), as opposed to a single battle from it. The game was primarily intended to be played by two players, with the Fellowship player taking the side of the Free Peoples of Middle-earth and the Dark Power player controlling the forces of Sauron and his subordinates.

The published game also had abbreviated rules for a three-player version with one player taking the role of Saruman; a fuller version of these rules was printed in issue #37 of Moves magazine. Like most SPI wargames, it is played on a map with a hex grid imposed upon it to regulate movement, using small cardboard counters to represent the units. There are also many cards with data on characters, monsters, and magic items, as well as playable events from the story and a deck to regulate Sauron's searches for the Fellowship. The game can be played in one of two modes. The simpler is the Character Game, which covers only the quest by the Fellowship to destroy the One Ring. In the Character Game the only units controlled by each player are, for the Fellowship player, the members of the Fellowship, and for the Dark Power player, the nine Nazgûl, Saruman, the Mouth of Sauron, and possibly Gollum (should he manage to acquire the Ring). The Fellowship player attempts to transport the Ring to Mount Doom, while the Dark Power player attempts to locate the Fellowship, seize the Ring, and take it to Barad-dur. The Dark Power also has the option of winning a military victory, played out by moving Nazgûl to various important Fellowship-controlled fortresses and rolling dice see if they are captured (an abstract way of playing out the military campaigns of the war). The more complex mode of play is the Campaign Game, which adds in army units for both sides as well as other characters from the story who were involved in the military campaigns. An odds-ratio combat system is used to play out combat between armies. Players can win with their Ring-based objective from the Character game or by capturing a specified list of objectives with their armies. Characters in the game are rated for their abilities in individual combat, magic, army leadership, endurance, and resistance to the lure of the Ring. To simulate Sauron's conflicting needs of searching for the Ring versus directing his armies, the Dark Power player is given a variable number of "Shadow Points" each turn, which they spend to perform various activities. Among these is searching for the Fellowship; although the hex locations of various Fellowship members are known, their identity is not (their counters are kept upside-down), and Sauron must perform search actions with Nazgûl or orcs to identify the characters, and to spot them so they can be fought or captured. Which areas of the map can be searched, and with what forces, is controlled by a small deck of cards. Great but not perfect but dont fret!

Maps are all Very Good to Like New. Shadowfax card was missing but has been recreated by pdf available from spigamesDOTnet Get it..

E-Bay wont allow the linking of websites, so you get to translate this one. Counters: INCOMPLETE BUT EVERY War of the Ring is missing ONE part a 5-5 Uruk-Hai which is called for in Reinforcements but was not actually supplied! Also, with chocolate brown pieces from the 70s, some are destined to disappear. HOWEVER , THIS WILL NOT DIMINISH PLAY because this game uses a strange system that allows units to be broken down into smaller components either due to combat losses or the need to disperse, so there are LOTS of replacement counters! In fact, there are only a few of Saurons pieces missing and, now, substituted for with a replacement counter everyone else off the initial placement and reinforcements is there! ALL counters have been sorted into baggies by side and then by time of appearance or replacements. Ive ALSO included six of my own homegrown endurance charts. You have two clean originals, but mine are more colorful! Not bad for forty+ years of shelf wear worn corners, some bleaching. No mold or nasty stains! Mine is a non-smoking home, but I cannot guarantee that these items have not been in a smoking home. SEE MY OTHER AUCTIONS FOR OTHER ITEMS!! Dont be shy if youre new to e-bay! Charges are incurred just to list an item, so backing out incurs a loss. I do this for fun well, clearing out mathoms - not profit. The item "SPI Games of MIDDLE EARTH boardgames LOTR War of the Ring Gondor & Sauron" is in sale since Monday, April 26, 2021.

This item is in the category "Toys & Hobbies\Games\Board & Traditional Games\Vintage Manufacture". The seller is "mathomend" and is located in Glendora, California.