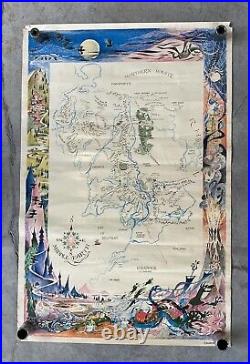 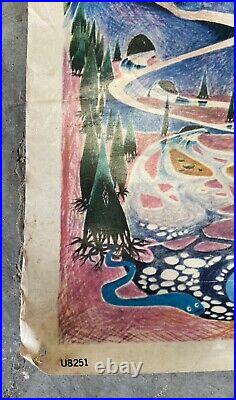 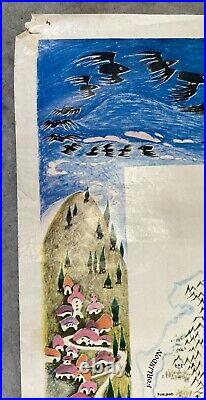 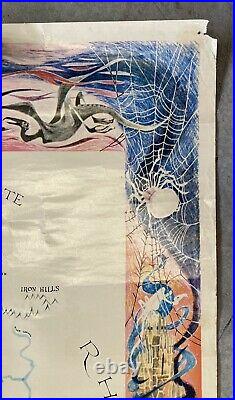 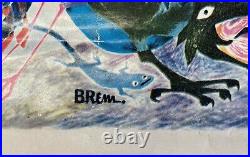 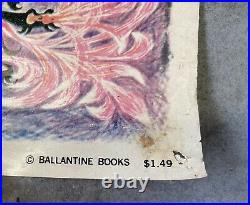 Both posters were based on cartography by J. Tolkien and Christopher Tolkien to depict the fictional region of Middle-earth. None of these maps cover the whole continent of Middle-earth; instead they only portray the north-western part of the continent, where the story of The Lord of the Rings takes place. The earlier poster (this one), signed "BRem" (Barbara Remington), was published in the 1960s by Ballantine Books[1] and features border images adapted from Remington's cover designs for the 1965 Ballantine paperback edition of The Lord of the Rings.

The second version, by Pauline Baynes, was published in 1970 by George Allen & Unwinin the UK and Ballantine Books in the USA. It features ten small inset illustrations of important locations from the story. The poster is framed at the top by a row of nine figures representing the members of the "Fellowship of the Ring" setting out on their quest.

At the bottom is an array of antagonists from the novel, including the nine Black Riders, Gollum, Shelob, and various Orcs. Produced by Ballantine books in late 60's or early 70's, artwork by Brem. Signed BALLANTINE BOOKS in the lower right corner. It measures 24" X 37-1/2" and has been rolled.

This is an original poster. The item "RARE Lord of the Rings Original 1960's Poster, Map of Middle Earth, by BREM" is in sale since Thursday, October 14, 2021. This item is in the category "Collectibles\Fantasy, Mythical & Magic\Lord of the Rings\Posters, Prints". The seller is "estatefindsandliquidations" and is located in Bristol, Tennessee.