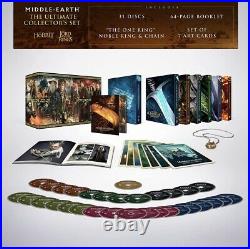 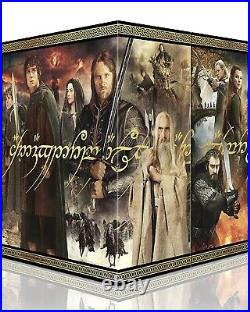 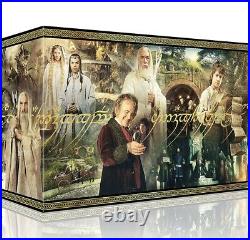 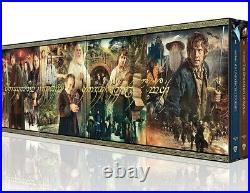 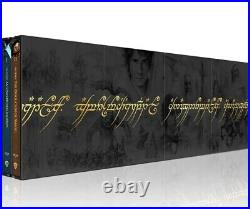 In celebration of the 20th anniversary of The Fellowship of the Ring, all 6 movies have been newly remastered on Blu-ray. Ultimate Collectors Edition - Theatrical and Extended Versions of all 6 Films in spectacular 4K and Blu-ray. An Unexpected Journey, The Desolation of Smaug, The Battle of the Five Armies presented in collectable foil sleeves.

The Lord of the Rings Trilogy. The Fellowship of the Ring, The Two Towers, The Return of the King presented in collectable foil sleeves. Keep the One Ring close to your chest with this Nobel Collection pendant.

The gold-coloured ring features the infamous inscribed One Ring verse. To honor the 20th anniversary of The Lord of the Rings Trilogy, Alamo Drafthouse reunited Middle-earths finest for three special conversations hosted by Stephen Colbert. Also included is The Festival De Cannes Presentation Reel. A collection of costume sketches, photography and production notes. From the Hobbits of the Shire to the King of Gondor.

7 Travel Poster Art Cards. 2-sided art cards, one for each film, and an exclusive Rivendell card. This Ultimate Collector's Set includes: 31 DISCS INCLUDE THEATRICAL AND EXTENDED VERSIONS OF ALL 6 FILMS WITH FILMMAKER COMMENTARIES ON BLU-RAY THE HOBBIT TRILOGY AN UNEXPECTED JOURNEY THE DESOLATION OF SMAUG THE BATTLE OF THE FIVE ARMIES THE LORD OF THE RINGS TRILOGY THE FELLOWSHIP OF THE RING THE TWO TOWERS THE RETURN OF THE KING EXCLUSIVE BLU-RAY BONUS DISC THE ONE RING PENDENT 64 -PAGE BOOKLET OF COSTUME SKETCHES, PHOTOGRAPHY AND PRODUCTION NOTES 7 TRAVEL POSTER ART CARDS COLLECTABLE SLIPCASE TRANSFORMS INTO MULTIPLE DISPLAY CONFIGURATIONS FELLOWSHIP OF THE RING Assited by a fellowship of heroes, Frodo Baggins plunges into a perilous trek to take the mystical One Ring to Mount Doom so it and its magical power can be destroyed and never possessed by evil Lord Sauron. The astonishing journey begins in the first film of director/cowriter Peter Jacksons epic trilogy that redefined fantasy filmmaking. This imaginative foray into J.

Gollum insists on being the guide. Can anyone so corrupted by the ring be trusted?

RETURN OF THE KING It is time. For Frodo to overcome the wickedness of Gollum, the horrifying attack of colossal arachnid Shelob and the soul-twisting allure of a ring that resists destruction. For Aragorn to take up the sword of his forebears and the crown of his birthright. For the mighty clash that Wizard Gandalf calls the great battle of our time. And for the inspired culmination of the fi lms based on J. For the third time, a Rings movie was a Best Picture Academy Award nominee, and for the first time it claimed that prize (plus 10 more). The King deserves its crown. AN UNEXPECTED JOURNEY Follow title character Bilbo Baggins, who along with the Wizard Gandalf and 13 Dwarves, led by Thorin Oakenshield is swept into an epic quest to reclaim the lost Dwarf Kingdom of Erebor from the fearsome Dragon Smaug. Their journey will take them into the Wild and through treacherous lands inhabited by Goblins, Orcs and deadly Wargs, as well as by a mysterious and sinister figure known only as the Necromancer. Along the path, the unassuming Bilbo Baggins not only discovers depths of ingenuity and courage that surprise even himself, he also gains possession of a precious ring tied to the fate of all Middle-earth in ways he cannot begin to imagine. THE DESOLATION OF SMAUG THE HOBBIT BILBO BAGGINS, the Wizard Gandalf and 13 Dwarves, led by Thorin Oakenshield, continue their journey to reclaim the Dwarf Kingdom of Erebor.

Along the way, they encounter skin-changer Beorn; giant Spiders of Mirkwood; Wood-elves led by Legolas, Tauriel and King Thranduil; and a mysterious Man named Bard, who smuggles them into Lake-town. Finally reaching the Lonely Mountain, they face their greatest danger the Dragon Smaug. BATTLE OF THE FIVE ARMIES Thorin Oakensheild and the Dwarves of Erebor have reclaimed the vast wealth of their homeland, but now face the consequences of having unleashed the terrifying Dragon Smaug upon Lake-town.

Meanwhile, Sauron, the Dark Lord, has sent forth legions of Orcs to attack the Lonely Mountain, and Bilbo Baggins finds himself fighting for his life as five great armies go to war. As darkness converges, the races of Dwarves, Elves and Men must decide unite or be destroyed. EXCLUSIVE BLU-RAY BONUS DISC INCLUDES: ALAMO DRAFTHOUSE THE LORD OF THE RINGS CAST REUNIONS To honour the 20th anniversary of The Lord of the Rings Trilogy, Alamo Drafthouse reunited Middle-earths finest for three special conversations hosted by Stephen Colbert.

FESTIVAL DE CANNES PRESENTATION REEL. The item "Middle-earth The Ultimate Collectors Edition (Lord of the Rings + Hobbit 4k)" is in sale since Thursday, September 16, 2021. This item is in the category "Films & TV\DVDs & Blu-rays". The seller is "markshon8606" and is located in Glasgow. This item can be shipped to all countries in Europe, United States, Canada.