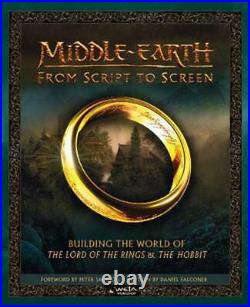 Middle-earth: from Script to Screen. By Daniel Falconer, Weta, K. For the first time ever, the epic, in-depth story of the creation of one of the most famous fantasy worlds ever imagined, a richly illustrated compendium that reveals the breathtaking craftsmanship, artistry, and technology behind the magical Middle-earth of The Lord of the Rings and The Hobbit Motion Picture Trilogies, directed by Peter Jackson. Middle-Earth: From Script to Screen tells the complete story of how J. Tolkien s magic world was brought to vivid life on the big screen in the record-breaking film trilogies The Lord of the Rings Motion Picture Trilogy and The Hobbit Motion Picture Trilogy. Drawing on resources, stories, and content from the archives of the companies and individuals behind the films, much of which have never appeared in print before, as well as interviews with director Peter Jackson and key members of the Art Department, Shooting Crews, Park Road Post, and Weta Digital teams who share their personal insights on the creative process, this astonishing resource reveals: How the worlds were built, brick by brick and pixel by pixel;How environments were extended digitally or imagined entirely as computer generated spaces;How the multiple shooting units functioned;How cast members and characters interacted with their environments. Daniel Falconer takes fans from storyboard concepts to deep into the post-production process where the films were edited, graded, and scored, explaining in depth how each enhanced the films. He also discusses how the processes involved in establishing Middle-earth for the screen have evolved over the fifteen years between the start and finish of the trilogies. Going region by region and culture by culture in this fantasy realm, Middle-Earth: From Script to Screen describes how each area created for the films was defined, what made it unique, and what role it played in the stories. Illustrated with final film imagery, behind-the-scenes pictures and conceptual artwork, including places not seen in the final films, this monumental compilation offers unique and far-reaching insights into the creation of the world we know and love as Middle-earth. Weta Workshop is a multi-award winning conceptual design and physical manufacturing facility servicing the world's entertainment and creative industries. It houses a range of disciplines under one roof - including conceptual design, weapons, armour & chainmaille, specialist props, vehicles, specialty costumes, models & miniatures, special makeup & prosthetics, public art & displays. Daniel Falconer has been a designer at Weta Workshop for more than fifteen years, producing conceptual art as part of the design team on many of the company's high profile projects including The Lord of the Rings, King Kong, The Chronicles of Narnia, Avatar and The Hobbit. Daniel lives and works in Wellington with his wife Catherine and two daughters. Rice is a national award-winning screenwriter and author who has worked for both Magic Leap and Weta Workshop. Over the years, her love of storytelling has led to producing and geeking out in various webshows and short films.

When not writing or filming, she can be found hiking in the woods, baking, running, and enjoying the company of the many animals on her family ranch in the Santa Cruz Mountains of California. Grand Eagle Retail is the ideal place for all your shopping needs! We are unable to deliver faster than stated.

International deliveries will take 1-6 weeks. Please contact Customer Services and request "Return Authorisation" before you send your item back to us. We cannot take responsibility for items which are lost or damaged in transit. The item "Middle-earth from Script to Screen Building the World of the Lord of the Rings" is in sale since Monday, January 21, 2019. This item is in the category "Books\Nonfiction". The seller is "grandeagleretail" and is located in Calgary, Alberta.